Javion is a dutiful and loving black father. He is the protector and provider of the family, including his wife, daughter, and grandmother. However, he is haunted by a secret that he continues to bury in silence. Not knowing how to deal with the trauma, he attempts to hide the behemoth inside him that is trying to break out. But not until tonight when he is finally overwhelmed, and he attacks his family while he ultimately comes face-to-face with his painful past. Only the prayerful hands of his grandmother can help channel his buried emotion from taking control.
Project Links 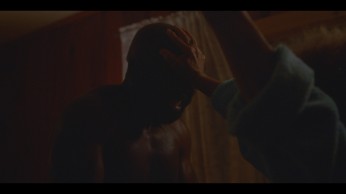 Now there’s a revolutionary way to socialize without the need for others! MeMore is a therapeutic hallucinogen that generates multiple, interactive clonegrams you can enjoy in the comfort of your own home, or while safely navigating public spaces. Enjoy more, live more, be more… with MeMore!*

He engages in playing card fraud while hiding from the stalkers and developing a new scam. His girlfriend interrupts him of this process, and he must decide what is more important to him.

Beyond our known time space the human being discovered the sacred code that made them immortal, covering with obscurity their days for ever…

Derek nervously prepares to attend a party with his new crush, but as plans unravel, so does he.

NOTE: Festival took place during the COVID-19 virus lockdown so all screenings were held in private.

The beginning of a (temporary) new era.

See you at the festivals. Whenever that happens!

I smiled…. I smiled the biggest goofiest smile I have. I was delighted to hear the audience felt that sense of wonder and playfulness that comes with innocence. I think people really got it and took something positive from the film.

Submit your short film that’s 5 minutes or less and get it showcased at the Toronto Short Film Festival.

Garner an audience feedback video of your film and help your film get into more festivals and/or make it go viral online!

Submit your Under 5 Minute Short Film to the festival and get it showcased at the FEEDBACK Film Festival.

Submit your short film that’s 5 minutes or less and get it showcased at the Toronto Short Film Festival.

Garner an audience feedback video of your film and help your film get into more festivals and/or make it go viral online!

After a few years making web commercials with work experience in Paris, London, Barcelona & California, i’m now shifting to new project such as music videos and short length movies which have always been my first passions.

The first idea R!X had was to make some kind of multicam live video from one of his song. It’s a long song and I felt it could be quite boring especially for viewers on the web. At the same time, I was fed up with all the thing around Covid 19 (Toilet papers / Pangolins, Pasta…) so I decided to add all these absurd items into the cooking of the video.